This story (most likely novel-length) started several years ago as an attempt to write dark erotica, but at this point I have realised that is not what I want to write. Of course, there is still the core of attraction between our 1st person point of view (Sol, a non-binary person) and one of the ghosts that haunt Sol's place of work.

The premise for the story is a group of people who have been hired to clean up and prepare a set of buildings for renovation on a fictional island off the west coast of Sweden. Those buildings are collectively known as Saint Dymphna's psychiatric hospital and have been in disuse since it's closure during the 1990 psychatric reform. The entire area has been bought by a developer to be turned into a luxury spa and hotel. One might think that a former hospital wouldn't be that popular to stay at, but in many ways it is coming full circle.

Named for an Irish saint of mental disorders and similar (including victims of sexual violence and incest), it started as a health resort because the spring water was said to be healing to the spirit and mind. In the early 1900s it rebranded slightly to become an asylum--mental hospital for those who were considered to not be curable--but in the 1929 (national) psychiatric reform it opened it's doors to all kinds of patients. To outsiders it was known to be a calming and productive place where the patients were encouraged to do menial work to get better mental health, and under head doctor Andreas Cornell (1932-1947) it was considered progressive in that it allowed patients to spend time together (with nurses and orderlies as chaperons) no matter their social class or diagnosis, and a lot of good research came out of St Dymphna's. Especially the storm wards, where the most dangerous patients were kept.

A fire in 1945 killed several orderlies and patients. It started investigations into how patients were really treated, leading to several patients being freed and, after two years, Andreas Cornell leaving his position. Finally a second psychatric reform (implemented 1995) closed the doors to Saint Dymphna altogether.

The main cast are the ones staying on the island to clean up the buildings: They're led by Inez Falk and consists of Sol (their last name not revealed), Tess Lindblom, Daniel Nowak and Hannes Olsson, who each have their own (public or not) reasons for taking this particular job. Weaving in and out of the story are several ghosts, with Erik Johansson and the pair of Beata and Beatris (ghost and her doll) taking main stage as Sol unravel mysteries of several generations and time leads to a final confrontation with things even ghosts fear.

Knowing that I wanted to make images as inspiration for me, I went to various free stock photo sites (links at the very end) and gathered both backgrounds and portraits that could be used. The very first was the doll Beata. She is visible in three images: the first is her and her best friend Beatris, the second and third include her partly hiding behind the stairs in the images of both Sol and Daniel.

I wanted to tie all images in the series together, but in a way that kept each image unique. Each image is a manipulation of a person against a background (done in Affinity Photo, my favourite photo editing software), and finished in Analog Efex Pro 2 (part of the free Nik Collection). In AEP2 I age each image and put on that cracked glass frame. If you compare each of the images, you'll notice the exact same crack in the top-left. 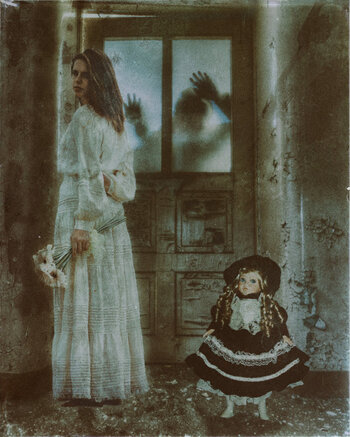 As the first image I had a lot of freedom and choose a background that shows someone (or something?) wanting to get in through the door. I left it unclear on what/where that is, since the focus should be on the ghost and her haunted doll. To give Beatris a more ghost-like appearance there is a glow around her, and a slight translucent quality to her. Beata, on the other hand, looks quite solid because she is.

I wanted the image to look a bit disconcerting, since while Beatris is kind and gentle, she is still dead. And the doll that she loved so much while alive is now walking around as if she was alive (and being quite mischevious at times, like hiding and watching, though not evil or even mean). 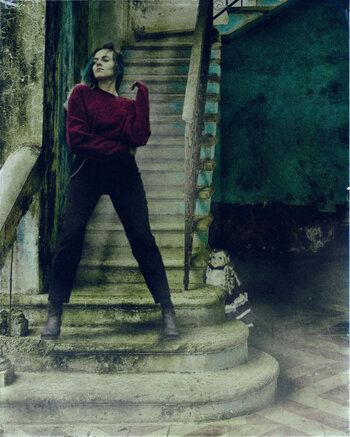 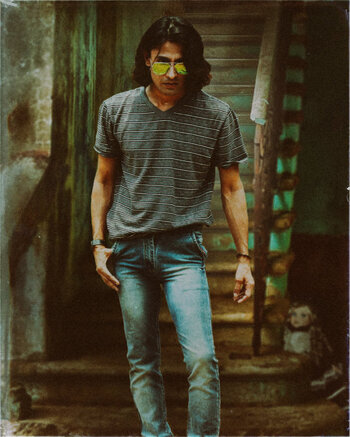 While these two images are coloured slightly differently and zoomed quite differently, I connect them because they have the same background, with Beata hiding behind the stairs. Sol came first. I found an amazing image of a person standing on the bed of a truck in that bold don't-give-a-fuck stance, and I knew this was perfect for how I wanted Sol to come off. The background came second, in a search of "abandoned" or "haunted" or something like that. It is in fact neither, rather a beautiful image from a museum in Nicaragua. Cropped down with mist and odd lighting, it looked like a brilliant setting for Sol. And then I decided to sneak Beata in behind, because it made sense, seeing that Beata is a mischevious little scamp.

Daniel's image was one of the last I did, and I knew I wanted to tie it in with one of the prior ones, but wasn't sure how. It didn't help that his feet had strange grass marks around them, so I had to crop that off, as well as edit away the cigarette hanging from his hand (even if he might smoke in the story--I don't know at this point--he probably shouldn't be doing that indoors). I did use a lot of the mist and fog from Sol's image, but changed out the green tones for more brown, and cropped the stairs even closer around him. 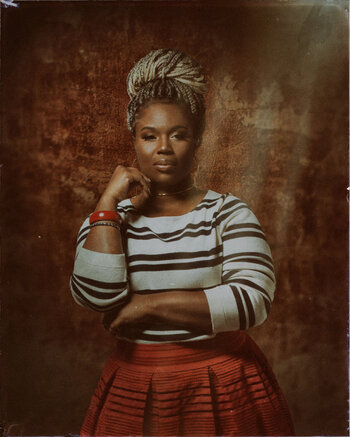 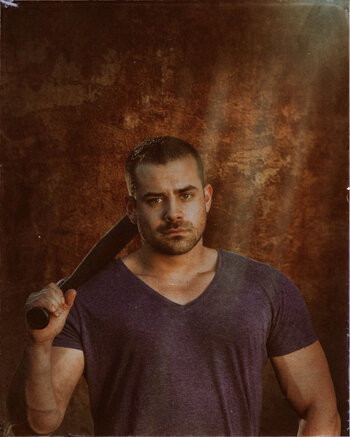 Inez and Hannes were two I had really strong mental images of what they looked like. When we first meet Inez, she's described this way: "blonde and black coils are piled on top of her head, like a crown wrapped in ribbon", and I wanted to find an image that could match that. As anyone who's ever tried to find stock photos of non-white people can attest to, it is not easy. While I really like the woman I found to use as a model, I didn't find a good full-sized image of her, but only this portrait-like one (against a background of a wall of newspaper), which is why I turned it into something that could come out of a studio rather than a snap taken in action. I am quite pleased with the end result, however.

Hannes is described as "tall and broad, like a barn with nutcracker hands", and because I like that imagery I had to find something that worked. Again, the best image I found was more like a portrait. It was from the waist up (and I just realised that it was named "man-muscles-muscular-masculine" which amuses the heck out of me). Since I'd done a portrait with Inez, I decided to do something close to that for Hannes. 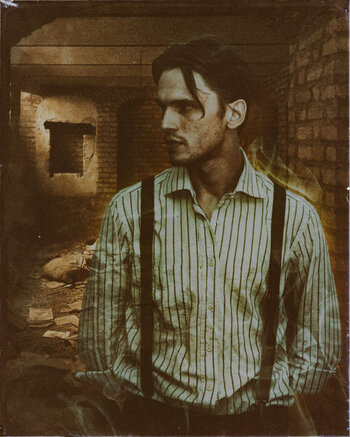 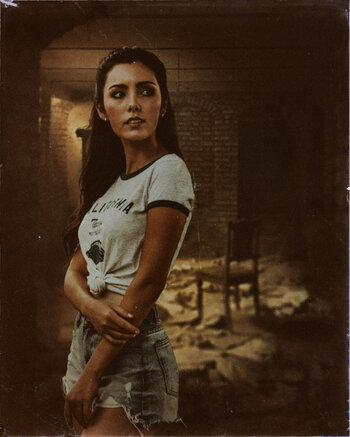 Erik was the third character image I made. I had a few strong guidelines for how I needed him to look: he needs to look slightly dangerous, quite attractive, and also be dressed in more vintage clothes. There was another picture of the same man that I preferred the look of, but it was black and white which limits my abilities to play with the colours. He died in the 1945 fire, and I wanted that to be hinted in him, so while he has a similar glow and translucence to him that Beatris has, the underlaying colours are far more orange and red, like fire, with a hint of smoke around him and in front of him. Since Erik and Sol have a connection I was playing with putting him into the same stairway as they are, suggesting he is looking at them, but in the end that wasn't working too well, so after also dismissing the background I'd used for Beata and Beatris I settled for this, since it seemed to fit him quite well. Exactly who or what he is looking at is left unstated, though there is one suggestion ...

... namely Tess. In the original image she was outside, and I expect that the hand hugging her arm and the slightly uncomfortable look on her face is more a testament to it being slightly chilly and she's being forced to stand there in shorts and a tee. But I liked the look of her and it fitted the character a lot. Tess really doesn't like working there, but she's planning on using any footage (video or photos) to propel her career as a blogger and vlogger. Because who doesn't love trauma-porn, right? (No, I am not particularly fond of Tess as a character, or the concept she was built around.) I do like how this image came out. Most of the others there's no real "in-world" reason for, but this one was taken to be a thumbnail for one of Tess's videos, and if asked about her expression she'll probably just wave it off. Because she can't remember why she was so scared in that moment. Or what she sensed that spooked her that badly.